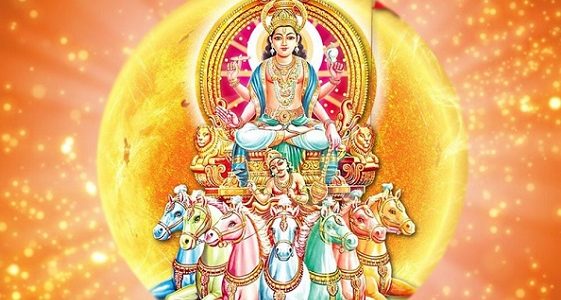 There is a legend in the Bhavishya purana that Indumati, a courtesan, had never done any charity in his life. When it came to the end of its time, Vashistha went to the sage and asked for a solution to get rid of Vashistha Muni, then the sage replied to the courtesans in the reply – Do Achala Saptami Vrat on the Saptami of Magh month (Achala Saptami Vrat). For this, eat only once on the day of Shashthi and before the bath on the morning of Saptami, put seven leaves of Aak on the head and meditate on the sun and shake the water from the sugarcane ‘Namaste Rudraupaya Rasanam Patye Namah. Varunay Namha.

After bathing, make an Ashtadali statue of the Sun and install Shiva and Parvati and worship them methodically and donate them by filling rice in a copper vessel. Ganika Indumati observed Magh Saptami fast according to the statement of Muni. After sacrificing her body by virtue, Indra made her the heroine of the Apsaras. Those who cannot bathe in the river, they can bathe by putting Ganga water in the water.

According to another legend, Lord Shree Krishna’s son Shamb was proud of his strength and physical beauty. Once Durvasa Rishi came to meet Shri Krishna, at that time the body of Durvasa Rishi had become very lean because he was absorbed in difficult tenacity for a long time. Shamb laughed seeing Rishi. By nature, the angry sage got angry at Shamb’s insolence and cursed Shamb for being leprosy. The curse of the sage took effect immediately. When there was no benefit from the treatment,