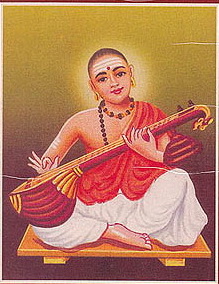 He studied Telugu and Sanskrit as well as classical music with his father. Venkatamukhi studied the famous book Chaturdandi Prakashikai on music. He was also able to acquire the knowledge of our scriptures as needed.During his time in Kashi, Hindustani music had a profound effect on his creativity, which is evident not only in the management of Hindustani ragas but also in the portrayal of ragas in general. The tunes they brought from Hindustani music to the Carnatic tradition are Saranga, Dwijavanti etc. He composed many hymns in Yamuna Kalyani . Among them is Kirtana Jambupate Mam Pahi for the melody and the greatness of the glories. Parmala Ranganath in Hamir Kalyani